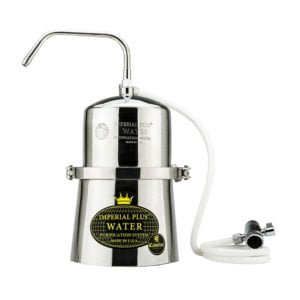 One of the best American Water Purification Systems for the shower and bath.

How dangerous is the water we use for drinking and bathing?

“For most people, a hot shower or bath are considered one of the smallest, simplest joys of life”.

But beyond that, many people do not know or do not realize the dangers from chlorine and the other dangerous chemicals in water in general.

Although chlorine is used worldwide for disinfecting water, still various scientific studies over time have shown that its existence is dangerous both in the consumption of drinking water and in its use in the shower or the bath.

It has been shown that we take on equally large quantities of dangerous chlorine and other chemicals from the water of the shower as we do from chlorinated drinking water.

A recent study published in the American journal of public health documented the connection of chlorine and breast, vagina and bladder cancer.

Dr. Riddle of Kemysts laboratory writes about chlorine: «Chlorine is used almost universally in the treatment of public water supply because of its toxic effect on harmful bacteria and other waterborne, disease-causing organisms. But there is growing evidence that chlorine in water may actually pose serious health risks when it is absorbed into human body over long period. These effects of chlorine may result from either ingestion or absorption through the skin.»

Various studies have connected chlorine and its by-products with cancer in the bladder, liver, stomach, the rectum and the vagina and with cases of heart disease, atherosclerosis, anemia, high blood pressure and allergic reactions.

The symptoms of ageing arteries, sclerosis as well as cancer in general are 2 important diseases which have chlorine as their main factor which creates trichloromethanes (ΤΗΜ’S) and Halo forms.

These powerful chemical contaminants cause the production of excessive free radicals in our body and so cause the destruction of cells as they cause regular normal muscle cells to move uncontrollably in the arterial wall and deteriorate.

The fibrous plaque formed is therefore in essence a benign tumor unfortunately connected with the origin of heart diseases.

There are indications that chlorine may destroy protein in our body and cause adverse results in the skin but also the hair, because it is proven that chlorine and most other chemical substances can be absorbed not only by ingesting drinking water but also through the skin during the shower, bath, or the exposure of the body in a swimming pool.

During the shower our skin absorbs as much or more chlorine and other dangerous chemicals than those it will absorb if we drink unfiltered tap water.

Moreover, breast, vagina and bladder cancer have been connected to the absorption of chlorine both from drinking water and from the water during the shower or bath, and it has been shown that the proportion of cancer in people who use chlorinated water is 96% higher than in those who use water de-chlorination systems.

The scalp and the hair in particular, suffer the worst effect from chlorine. The water that falls on hair makes it dull, dry, while dehydration and its bad health is obvious.

The hair breaks easily, splits, the skin on the head becomes dry and has dandruff. We can understand how harmful are the effects of chlorine on hair when using swimming pool water, where chlorine is definitely increased.

After a little while, hair fades – especially dyed hair – and presents an ugly image.

The American Environmental Protection Agency also stresses that precisely because of chlorine, the gas chloroform is released in high levels inside every house.

Essentially, when chlorine turns into vapor, it combines with airborne molecules and forms the gas chloroform which is considered and is known as the cause contributing in asthma and other respiratory problems.

In a warm shower, skin pores open, thus allowing the rapid absorption of chlorine and other dangerous chemical substances.

Also, due to the fact that chlorine and other chemical substances evaporate at a lower temperature and at a faster rate than water vaporizes, we inhale it during the shower, where particularly high levels of chlorine vapors have accumulated with long-term future consequences.

This happens because as chlorine is inhaled by the lungs, it is immediately transferred everywhere through blood.

Chlorine is an oxidation factor and is transformed into trichloromethanes (THMs) including chloroform and bromoform.

So, what it the solution? As chlorine must – according to public health regulations – be present in all public drinking water supplies, it is up to the consumer to take the initiative and adopt measures for his protection, in order to have the best water. Therefore, the consumer is required to remove chlorine before using water at home and for drinking and bathing.

They really are; they are very important and indispensable as the US Council of Environmental Quality stresses. So, now the pioneering Camelot International Health Organization once more provides the best solution to the problem with the shower water filter “Imperial”, reducing the above-mentioned dangers and contributing fully to health and simultaneously to beauty maintenance.

Which are the benefits of the shower filter “Imperial” and its unique system?

Therefore, the existence of a shower filter “Imperial” in the home is now absolutely required in this time of pollution and degraded environment in general, since the removal of chlorine and chemical substances from the shower water is equally important and obligatory as the removal of contaminants from your drinking water.

In the “Imperial” shower filtration there are the following main components: carbon filtration, calcium sulfite, KDF 55:

Since 1980, the Camelot® International Health Organization has been a member of a large international organizations and American factories that have been contributing to the development and maintenance of human health since 1945